In this update, we finally get the engine in! That’s right, the time has come to get the engine in its place. It’s worth noting that up until this point, we had not actually checked to see if it would fit. There was no reason it shouldn’t, but we also had not verified anything. (Oh well)

Using an engine crane we were able to shimmy the engine in with the transmission attached. With some wiggling we got it to sit perfectly on the factory mounts. This wasn’t a huge shock, as the V6 sub-frame from the A4 and S4 shared the same mounting points. Our bigger concern was how all the A4 specific hardware would bolt up to the S4 motor and manual drivetrain. Right off the bat we saw that we were closer than we had anticipated but would need to make some changes and modifications to get it just right. To make the process a bit easier for anyone who may be doing the same thing, we are going to break up this wordy post into sections. 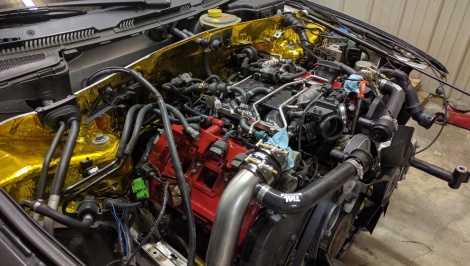 All this was a direct bolt up from our 2001 A4 to the S4 motor, we used the A4 sub-frame without a problem, the bolt locations are pretty much set. The trickiest part of this section was getting the two front motor mounts for the engine to sit in the correct hole on the frame brackets that attach to the sub-frame. It really only works one way, the transmission mounts wont line up without the motor mounts being in the correct position. Our recommendation is to start with lining up the rear transmission mounts. Then once those are loosely bolted in, set the engine mounts up. This job is best done with three people.

The power steering line that runs from the rack to the top of the engine along the passenger side bank and terminates into the power steering pump is also different between the S4 motor and A4 motor. They are very close but the shape of the lines are different at the connection point on the motor. The A4 2.8 line has a female end, while the S4 line has a male end. We were able to swap out the lines with the motor in the car, but if you do this before, it will be much easier. (Trust us, much easier) We had to go in through the driver side wheel well to access the 19mm and 22mm banjo bolts to get the A4 line out and the S4 line in. The S4 line will bolt right up the A4 2.8 steering rack, so no need to change that.

The fuel lines that connect the fuel rail on the S4 motor to the hard lines on the A4 2.8 body are also slightly different. The location of the hard lines are the same on the S4 and A4 2.8. The difference is the shape of the soft rubber lines and connection points to the fuel rail, so we changed out the soft rubber lines for a better fit. The hardest part of this were the clamps on the existing A4 lines. We had to destroy them to get the lines off, we used an OEM pinch clamp in their place and it has worked just fine. Also under this category, the N80 valve. On the A4, the valve sits on top of the air box and is powered by the A4 harness. In our case this would not work, because our S4 harness did not have the length to connect to the N80 valve in the A4 2.8 location. Our solution was simple, just use the S4 N80 and its location. To do this we had to remove the N80 valve from the A4 and its vacuum line. We then had to get a longer piece of vacuum hose to connect the hardline from the body of the A4 to the S4 valve location.

The vacuum system between the S4 and A4 was where we found the most difference. The A4 was an autotragic and our new motor and driveline is a six speed. This meant we could get rid of secondary air injection pump located down by the passenger side wheel well. We also removed the blue A4 vacuum reservoir and its bracket and lines associated with it. Finally we removed the pump located next to the ABS controller. All this had to come out to make room for the intercoolers, however we had to replace the vacuum reservoir, because the S4 motor also uses one. The S4 has a kidney shaped reservoir under the driver side fender. We used one of these to replace the A4 reservoir we removed. Luckily the A4 has the same hard lines as the S4, and the mounts for the kidney reservoir are also there (Left unused) so with some simple cutting and clamping the new reservoir was in place. We recommend getting the parts off a donor car, and taking as much of the vac lines as possible.

Finally the brake booster vacuum line on the A4 has a vacuum valve which is no longer needed. The S4 wire harness doesn’t have a plug for it, so it needed to be removed and replaced with the correct hose from the S4 booster. The booster assembly itself is the same across the A4 and S4. So there is no need to change them out.

The AC lines are very different across the A4 and S4 platforms, so you will need all four S4 ac lines, and the S4 condenser and dryer. The compressor is the same for the A4 2.8 and S4 so that will remain the same. The brackets for the intercoolers are also not on the A4 at all, so you will need to get them from a donor car. We were able to get ours from an auto recycling parts center. Attaching them is also a pain, as they are originally riveted onto the frame of the car. We used self-tapping sheet metal screws with locking washers to hold them in place. The A4 has the holes already pre-marked, so getting the location right isn’t hard. The intercoolers are supported by the hoses but will also need the support from the brackets. Once these are in place, the intercoolers can mount securely and properly to the car.

So there you have it. That is the basic run down for what it takes to get the S4 motor to drop into the A4 body. We hope this helps with your swap project, but as it stands, we would just recommend you buy an S4 from the get go. We did this to save a wagon, and because we are insane. Stay tuned for more detail about the intercooler install and other product reviews! 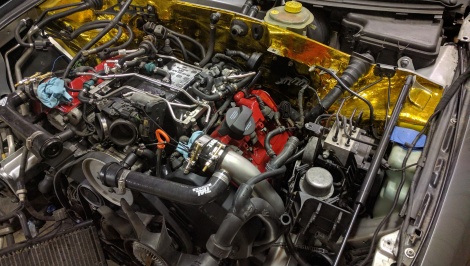