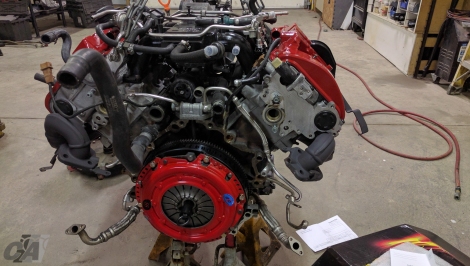 In this update we finish up the transmission for our avant with a fresh clutch install from Southbend. At this point in the project, our engine and transmission were starting to look like a complete assembly again. The transmission was just about ready to rejoin the engine, however we needed to change out the old and rather abused clutch and dual mass flywheel. We debated back and forth about how much we would need to replace/ wanted to replace, but ultimately we decided replace both the clutch and the flywheel at the same time. We opted to use a single mass steel flywheel from Southbend over the factory dual mass flywheel. While dual mass flywheels are great for smooth and quite engagements, they are also heavy and sluggish to rev. In our case, the factory dual mass flywheel also fell short on its ability to handle the new power figures for the car. The result would have been an unpleasant vibration at speed or even possible failure of the unit altogether. With this in mind, the single mass option seems like a no brainer, however there are tradeoffs in going to a lighter single mass flywheel. The engine will now rev much faster due to less mass on the flywheel, but it will as drop the revs much faster. This can make daily street driving a choir. The single mass wheel is also more prone to chatter, which is a vibration on engagement and can be very annoying in traffic. So while a single mass application was right for us, you may want to consider these advantages and disadvantages for your build.

We chose to mate the Southbend flywheel with a Southbend stage three clutch approximately rated for the wagon’s new power figures. The clutch is a single disk hybrid surface that behaves like a factory clutch while more holding power. When upgrading your engine’s horsepower and torque output, it’s important to upgrade the clutch to match. Otherwise the car’s clutch will slip, rather than putting the power down to the wheels. Our new setup will easily hold the power we are making while retaining the factory driving characteristics, making the car friendlier to drive on the street and in traffic. While a more aggressive setup may allow to put the power down faster, we didn’t want the drivability of the car to suffer as this will be a street car mostly. If you are not sure what application would be best for your project, we recommend calling Southbend or your preferred clutch manufacturer. The guys at Southbend were extremely helpful and provided quality information that we found useful.

The installation of the clutch and flywheel was straight forward, we removed the old clutch and dual mass wheel and set them aside. The S4 drivetrain has a tone ring on the flywheel that is read by a sensor plugged into the ECU. There is a specific orientation to the ring, and you must match it when you reinstall the new flywheel. If you are not sure, mark the block and teeth on the old flywheel with a paint pen before removing it. Line up the teeth on the new flywheel and transfer the paint marks. In our case, the Southbend flywheel followed the Audi bolt pattern for the flywheel which takes care of the tone ring orientation. For factory parts and high quality parts, the flywheel bolt holes will come machined in a way so the flywheel will only fit in the correct orientation. Some cheaper flywheels have been known to come with less exact tolerances, resulting a teardown of already completed work. Don’t let this happen to you! Make sure to verify the orientation of the tone ring before wrapping up the clutch install. Once the flywheel was on, we used the hardware provided by Southbend and torqued the bolts down to the correct spec, provided by Southbend. It is CRITICAL that the bolts be torqued to the correct spec and are uniformly tight. DO NOT reuse old hardware in the installation of the flywheel or clutch.  Once the flywheel bolts had been checked, we marked them with a paint pen and moved on to install the clutch. The clutch installs pretty much exactly like the flywheel, however you will need to use a clutch alignment tool to center the clutch on the flywheel. Typically these are provided with the new clutch. Once the clutch is aligned, the bolts can be tightened in a star pattern to the their final spec. We marked these as well. With any new clutch install, it is highly recommend that the throw out bearing be replaced as well. Our Southbend kit came with one. Simply slide the old bearing off and slide the new bearing on. Once this has been done, the transmission is ready to be mated with the engine. This is a two person job at a minimum. We used three guys to make sure the splines on the transmission output shaft lined up flywheel. With a lot of carful wiggling work the transmission into place and tighten down the bell housing bolts in a star pattern to their final spec. Do not try to force the splines into place, as that can damage them. We also found it useful to manually turn the crank shaft to aid in lining up the spines. Other important things to consider when doing a clutch and flywheel install include checking the rear main seal for leaks and replacing the clutch fork if needed. In our case, we were fine on both fronts. That pretty much wraps it up for us, next time we will move on to the engine and its reassembly. Until next time, happy wrenching.