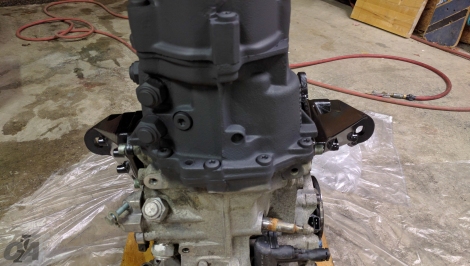 In this update for the Avant Resto Project, we’ll cover the prep for our 01e six-speed transmission and the slave cylinder installation. While the six-speed from our donor car came with the right hardware, it was also a complete mess. After pressure washing the motor we discovered the paint was failing and the bare metal on the rear section of the transmission was left exposed. The inside of the bell housing was covered in grease and grime, so the first order of business was to remove as much crap as we could take off. We used a strong degreaser and several wire brushes to take most of the gunk. Once we had cleaned up the housing as much as we could, we began the process of taping off the tail end of our 01e to prep for a high-temp matte black paintjob. This paint will help keep rust and corrosion to a minimum while refreshing the look of our transmission. Granted, no one will see it… but we’ll know it’s there. Once the bell housing was completely taped off and maked with plastic, we began spraying on several light coats of paint. We finished up with two thick coats and let the paint dry over the next three days. Once the paint was dry enough to work with we installed the brackets for the transmission, which we’d previously refinished. With all this in place, we turned our attention to replacing the old slave cylinder. 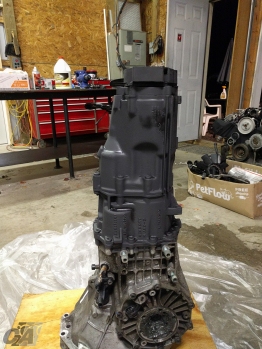 In basic terms, the slave cylinder is the piston which depresses the clutch fork and operate the disengagement of the clutch and throw out bearing. It is connected to the master cylinder via a hardline that snakes up through the reservoir and must be fully-bled after replacement. It is possible to replace the slave cylinder straight on the car, but it’s a much easier process when the transmission is already removed.

There is one metric hex key bolt holding the slave cylinder in place. A plastic plunger sits in a dish on the clutch fork, connecting the fork to the slave cylinder. Sometimes this bolt and plunger can be hard to line up but we had some luck and this was easy to do. The only problem we ran into during this install was a variance in part quality. Our OEM slave cylinder was made of plastic, but we opted to replace it with a metal one made by Febi. While the Febi part is technically a correct fitting, it has two small nubs on it that prevent it from sitting flush with the transmission mounting point. Much to our annoyance, we had to remove these nubs with an angle grinder. Once we double checked to make sure the plunger sat neat and flush on the clutch fork, we bolted it down. The transmission has a small quarter round flange that prevented the Febi part from sitting flush – this may not be the case on all 01e transmissions. We decided to grind down the Febi because it is the cheaper of the two parts to replace.

With this new slave installed and the transmission cleaned up, we’re now ready to install the clutch and flywheel. Keep an eye out for that update and walk-though, coming soon! Until next time, happy wrenching. 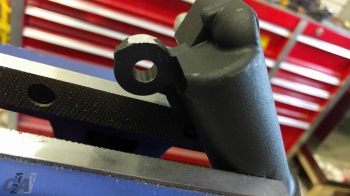