A while ago, some of you may recall our B5 took a beating. Well one way or another the rear suspension basically shit itself. We believe the problem was caused by a sheared axle bolt, which created a handful of even more problematic issues. To our best knowledge, the bolt tore apart the wheel bearing, hub and spindle in a very short period of time. The result was an excess amount of heat that cooked several other components. Parts such as the ABS sensor, axle and rear tie rod link all failed as well. The temps were high enough to fuse the ABS sensor in, expand the hub and spindle, as well as seize the rear caliper onto the hub. Most of the rear passenger side suspension was replaced. The biggest problem was removing parts in an effort to save them. Bolts were so stressed from the heat, that several snapped or stripped. In the end we ordered a new spindle, axle, caliper bracket, tie rod, hub, bearing and all the bolts including the eccentric set. The tear down was the most frustrating we have dealt with on our car, because it presented a road block at almost every turn. We started by removing the axle from the rear diff, then we focused on removing the spindle from the control arms. Next we removed the tie rod link from the sub frame. We were able to save the caliper, but not the carrier, which we grinded off to save the rotor and dust shield. Upon pulling the spindle, the axle actually separated into two very broken bits. So what seemed to a 50 repair quickly turned into a 500 dollar expense, reminding us what it means to own an old German car. None the less we will continue to love and own the thing till it won’t run anymore. Below are a few pictures of the carnage. 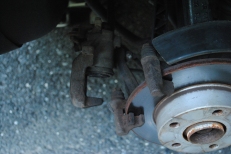 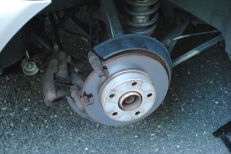