For our first update we have a lot of progress to report. We tackled both fenders, more on that later, and the mirrors. We also gave the car a detailed inspection and are happy with the results. The wagon appears to be in good health mechanically, although there is an oil leak some place. It’s rather small, so we are not too worried, but we will be changing the oil and other fluids soon. The biggest part of our update today is the fenders, the originals were trash. So we placed an order for a new set and put them on first. The job was not too hard, although there are a number of bolts that must be accessed to get the fender off. The wheel lining had several torx screws, and then the fender itself had about seven bolts total. (Also torx) The hardest ones to find were located behind the doors, as there was a secondary liner that had to come out. After that it was straight forward, just a bump or nudge to align the panel and then we tightened it all down. Be sure to disconnect the side blinker as well as the three bolts up front. These things can hang up the progress and damage the new fender if not taken care of. All in all we would give the difficulty about a 5 out of 10, only because aligning the damn thing can be tricky. We also replaced the craptastic side mirrors and even put on a new housing. This was also easy, as we only needed to remove the door card for access. The outer shell is held on by one triple square bolt. The housing itself has a plug that is a tight fit, but can be pulled through the door frame without removing the trim. (You will need a flat head) That’s all for now, minus some basic cleaning. We are looking into a color change for the interior, so stay tuned. 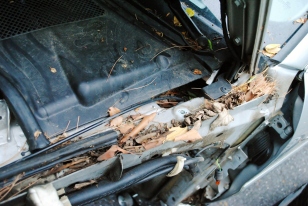