A few weeks ago we ran an article covering our recent trip to Phily, as some of you may remember we mentioned having a problem or two with the car on the trip. As it turns out, the coolant sensor had gone bad. Now this would not be a huge deal, but it was causing the car to have hard start problems. Basically the temp sensor was sending readings all over the place. This caused the car to electronically cut itself off during starts to protect the engine. As a result the car would become very hard to start after getting gas, for example, and made the engine flood. This would then cause the car to limit revs and idle erratically until it had burned off the fuel. All in all a very problematic situation given the fact that we were three hours away from our tools. Fast forward to the present, we were able to knock out the sensor replacement a few days ago. The job was not overly complex, but it did have its moments. On our B5 the v6 comes with two sensor types, an older blue connector and the newer green connector. (Yup, you guessed it, the VIN split is right in our year) So after taking a 50/50 shot at getting the right one, we turned our attention to the car. As we noted before, this job is not a complex one, but the location of the sensor makes it difficult to reach without removing several components first. There were only four or five bolts in total for the whole job, but getting to a few of them proved to be a tricky task. We were able to skip the difficulty of removing the air box because we are running a CAI. We simply unbolted the hose clamp closest to the throttle body and pulled the set up right off. This allowed us to reach and unplug the IAT sensor as well as the sensors on top of throttle body duct. There are a few bolts on top of the throttle body intake duct that must come off in order to reach the lower bolt and PVC connection. This lower bolt is the only bolt holding the duct to the throttle body, but it is the hardest to reach, as the proximity to the fire wall makes it hard to get a ratchet down to the bolt. The PVC connection is also tricky, and required a flat head screw driver in order to pry it loose. After some adjusting, we were able to remove the duct and finally get to the coolant sensor. The sensor itself is not hard to remove, and is only secured with a C clip. First we removed the plug, and then the sensor was pried out with needle nose pliers. It is important to note that we did not try this with the car hot, instead we waited till the engine was completely cold. This was to prevent the coolant from building positive pressure and spurting out of the sensor hole. We also opened the cap on the coolant expansion tank and then closed it to release any excess pressure, while keeping air bubbles out of the system. The new sensor went in without much of a problem. Getting the duct and sensors plugs back was not too hard either, all in all a pain, but not impossible. As per usual, we snapped a few shots found below. Happy wrenching. 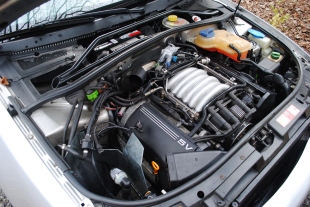