Chris Camelio was in the market for an A6 Avant for some time when he came across a super clean 3.0 tiptronic. He wasted no time and took the deal right away. He figured he would just drive it and had no real big plans for the car. However, we all know how this story goes and it wasn’t long before Chris had decided to modify his silver A6 wagon. He was smart and went after the stance of the car first, choosing a set of Rotiform SNAs. He wrapped the 20×10 inch wheels in a 245/30/20 set of Falkens. To finish the cars profile off, a set of STs were installed to give the car just the right height. Low. After taking care of the basics, Chris decided that he wanted a color change and chose a matte black vinyl from the 3M 1080 series. He had seen other wraps where the cars were completely covered, but never really fell in love with them. Instead, he wrapped everything on the car except the aluminum trim. He even found a set of Allroad door blades in aluminum and installed those for a perfect accent to the wheels and roof racks. The result is a well-balanced matte finish, with a pop of brushed aluminum that looks great. To tie everything together, Chris finished the roof with a titanium wrap that matches the brushed aluminum accents.

Satisfied with the look of the wagon, Chris turned his attention to the interior. It’s worth mentioning at this point that Chris has done most of the work on the car himself, with the help of a few friends from time to time. It’s also worth noting that Chris is a professional AV consultant and expert. So as you can imagine, the stereo set up in the car is nothing short of a symphony. Chris started working on installing a full sized Ipad into the dash space, but before he had a chance to finish, the Ipad mini was launched. Chris started over with the smaller Ipad and the end result is fantastic. The Ipad offers all the benefits of a radio plus many more in the form of apps. He even reused the oem knobs for volume control and sub gain. (And before any of you ask where to buy the face plate for an Ipad install, Chris made his custom. We asked.) To accompany the killer interface, Chris wired the car with more copper than Apollo Thirteen. Behind the Ipad, A farad cap and two Phoenix Gold class D amps. Chosen for their compact size, the amps and cap barely fit in the space left. He also installed power and ground blocks as well as a mini gel cell battery. To handle the massive power of the new system, Chris chose a set of Alpine Type R 6.5 components and a set of 10 inch Phoenix Gold subs. The subs sit hidden away in a custom fiberglass enclosure where the spare wheel was. The built in subs sit tucked away, without taking up any of the avant’s trunk space. Chris even built a cover for the subs using aluminum and leather to keep with the car’s exterior theme. To tie everything in the interior together, Chris’s final touch was a gray suede head liner and gray suede on the pillars. Clean.

More recently Chris turned his attention to the engine and performance of the car. He wanted some more power, so he swapped out the 3.0 Tip for a 2.7t with a 01e six speed. Yes you did read that correctly, he really did that. Let’s not forget he did most of the work himself. While the engine was out Chris did all the seals, because why not. He then installed an AWE lightweight single mass flywheel and RS4 clutch kit. To mount the 2.7t to the frame, Chris chose RS4 motor mounts. Last but not least, he went with a Magnaflow exhaust, catless downpipes and resonators to an X pipe design. While the engine was out, he also took the opportunity to install Forge DVs, complete an ICM delete and upgraded the coil pack. To top it off, he went with a J-Fonz stage two tune. Chris loves his wagon, it’s his daily driver. The effort and time he put in is clear in so many ways, and he is always finding more projects for it. Will Chris ever finish his A6 avant? Probably not. Chris tells us that he is always getting compliments on the car, from 16 year olds, to 60 years olds. It’s his favorite thing about the car. Besides driving it, that is.

Chris would like to thank Brian Miller and John Catalano with Amp of America (Stinger and Phoenix Gold) He would also like to thank Advanced Performance wheel and tire and Auto Vinyl Solutions. 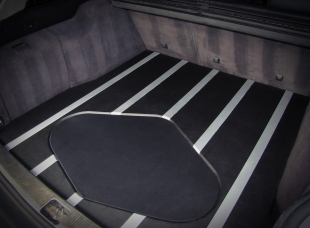 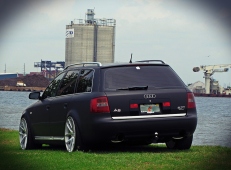 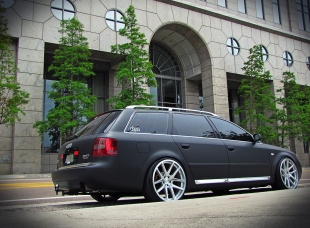